The Worst Place to Hide Valuables

To paint a picture of a burglar’s time in your home, they will normally spend between eight to 12 minutes in your home. Most burglars fear the police or the homeowner will catch them. They sneak in fast and leave in record time with the stolen goods. Usually, the burglar grabs as many stolen valuables as possible and exits the home like he was never there. You could discreetly store valuable items in strange places around the home, but we must advise you to avoid some of these obvious hiding areas that burglars check. 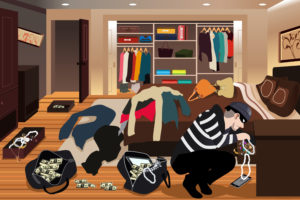 Where to Never Hide Your Valuables

Many people think messy drawers will discourage burglars, but they have no issue with removing the drawer. Burglars don’t care about your privacy. Oftentimes, burglars will have a drug addiction that drives them to steal to support their habit.

As stated before, burglars often steal to support a drug habit. A lot of burglars learned early on to check the refrigerator for stored prescriptions that they could sell on the black market or to use themselves. In addition, the freezer front door doesn’t work because of how Hollywood movies have shown this as a popular hiding place, and they have learned to check it. Many times, you might see a homeowner who wrapped his jewelry in foil and hid it in the freezer. Thieves aren’t dumb. They know if something looks out of place.

In the past, your child’s bedroom offered tons of security, and most burglars wouldn’t rummage through it because they couldn’t find valuables there. Today’s society differs from yesterday’s. Nowadays, children have expensive high-tech gadgets like TVs, iPads, game consoles and expensive electronics. In addition, most children don’t think twice to leave their valuables strewn around the room. Burglars won’t struggle to find the valuables, which makes it one of the first areas in the house that they hit.

As time goes on, burglars have learned to check new areas. Before movies began to show it, the toilet tank offered one of the best places to hide valuables, but believe it or not, some burglars have learned to check this spot. When movies began to show this hiding place, it became one of the popular places for people to hide valuables, and burglars began to check here because of it becoming a predictable hiding place.

Believe it or not, burglars have learned to check this spot. You may think that burglars wouldn’t check here for the grossness factor, but that doesn’t deter many from checking it. They will simply tip over your laundry and rifle through your dirty laundry because they have learned how some homeowners like to hide stuff here. It only takes five seconds to tip this over and check for valuables.

Hiding Things under the Bed

Most children hide things under the bed, and they may have come to believe that this hiding place was largely unknown. Here’s the truth: Your mother knew about this place, and most likely, the thieves will know to check here too.

Buried in the Backyard

Especially during the Depression Era of the 1930s, you would hear of people burying valuables and cash in their backyard. You have a few problems with this. First, you can easily forget where you buried your valuables, and this can lead to an all-out panic. Many people buried their valuables and were unable to find it at a later date. The second problem comes from other people. If you buy valuables in your backyard, you better tell no one of it, not even your best friend. Some people look on this comically, but if an unscrupulous person were to learn that you buried something in your backyard, they could go and dig it up without too much resistance. They wouldn’t even have to break into your home security to do it.

What Solution Do We Recommend?

The best recommendation that we could give is to hide a safe in the home and bolt it to the floor. You should never underestimate a burglar. Even if they find your safe, however, they won’t have the time to get it unbolted. Your best bet is to bolt it to concrete. You don’t want to simply have a safe because the burglar could steal your safe and take it back to their place to crack the code at their leisure. Look for a safe that comes with anchor points, and you will want an alarm system as well because this offer additional security, and if someone tries to break into it, it will set off an alarm to the police.

In general, don’t keep large amounts of cash in your home. Store it in the bank. You should also display caution for where you store your valuables because thieves are smarter than you think. They know where to look. You can speak with the experts at DS Locksmith to learn more about where to hide your valuables. In addition, they can help you with bolting your safe to the ground and putting an alarm system on it.

2 thoughts on “The Worst Place to Hide Valuables”

Here at DS Locksmith North Wales we are committed to providing the best quality services to be found in town.